Last year I published a Best (And Cheaper) GoPro HERO 5/6 Alternative Guide which was wildly popular with travelers, so this year I've decided to create a new Best (And Cheaper) Guide for the GoPro HERO8 & HERO7 Alternatives (aka: best alternatives to the new GoPro HERO models). In today's Travel Buyer Guide, I've compared and reviewed the Best GoPro HERO8, HERO7 Black, and HERO7 Silver Alternatives on the market – focusing on camera models that are less expensive than the GoPros. These cameras will allow you to get the features and quality of GoPro without the name brand price tag.

Everyone loves GoPro cameras but not all of us can afford their hefty price tag. Even travelers who could swing the price of a GoPro often opt for less expensive GoPro alternatives for a few reasons:

I like to start these Best (And Cheaper) Guides by comparing the camera models we're seeking alternatives for. This gives us a starting point for the rest of the article to compare the alternative cameras against.

The new GoPro HERO8 Black model offers a few upgrades from its predecessor including 1080P live streaming, improved HDR photos, 100Mbps Bit Rate videos at 4k, and HyperSmooth 2.0. Aside from tech specs, the HERO8 models introduced Mod Add-ons to improve your external light and sound capabilities like the Media Mod which has a 3.5MM mic (coming soon), Display Mod which is a flip-up screen for vlogging, and Light Mod which is add-on LED Lighting. Other than that, the HERO8 should look pretty familiar. Below I'll break down the HERO8's tech specs which we'll use to compare against the other models in this list.

The slightly older GoPro HERO7 Black model is still an impressive camera when it comes to features, which may look very similar to what you read above on the HERO8.

Next let's take a look at the GoPro HERO7 Silver. I'll note the differences between the Black model next to each spec.

I know that you didn't come here to compare GoPro models, but it's important to start by breaking down the various GoPro models in order to compare them to alternatives below. So without making you wait any longer, let me introduce to you your best GoPro HERO8, & HERO7 Alternatives.

AKASO is my go-to for cheap and reliable camera equipment for travel. Their V50 Elite, which is an upgrade from the previous V50 model, is my top pick for a GoPro HERO8 / HERO7 alternative. The three cameras are almost identical to look at, and you’re unlikely to notice a difference in performance, either. The V50 Elite comes with a waterproof case, a wireless remote, and 2 rechargeable Lithium Polymer batteries. 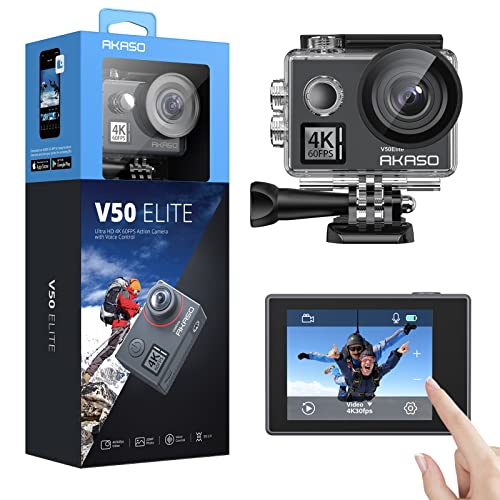 How does the AKASO V50 Elite compare to the GoPro HERO8 / HERO7?

💭 What do users think of the AKASO V50 Elite versus the GoPro HERO8 / HERO7?

Many users like how many features the V50 Elite packs into its compact body and some also comment on how impressive the build quality is for such a reasonably priced action camera. Customers generally think that it’s tricky to tell the difference between footage from a GoPro and the V50 Elite, but they also expressed frustration at the dullness of the screen when used in direct sunlight or underwater.

🔎 About AKASO the company

AKASO is a Chinese brand that started in 2013. Their main products are drones and they also offer a series of ancillary equipment for their drones including action cameras like the V50 series.

📷 Click here to purchase or read reviews of the AKASO V50 Elite.

YI is a solid imaging company with a long line of action cams in its five-year history. The YI 4K+ model was a firm favorite of mine and the launch of the 4K+ with higher frame rates and a newly-added touch screen has ensured that I remain a fan of the brand. YI’s slim styling looks great even when it’s encased in waterproof housings, and it’s able to withstand harsh temperatures and depths of up to 40 meters. 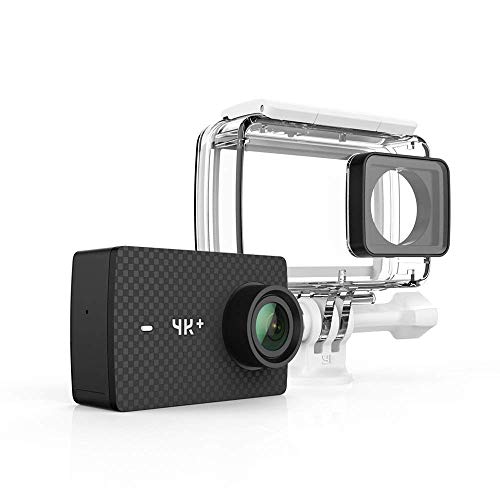 How does the YI 4K+ Action Camera compare to the GoPro HERO8 / HERO7?

YI’s customers are generally satisfied with the quality and clarity of the imaging on offer. Because it’s been around for a while, the 4K+ has gone through a series of enhancements including firmware updates that have provided sought-after functionality like voice control. Some users express frustration during setup, and the 4K+ can have some trouble recognizing hardware. But once you’re all set up, you’ve got a great budget-friendly alternative to GoPro.

🔎 About YI the company

YI is a Chinese brand that was launched in 2014. YI promises to help its customers see everything and they’re staying true to their word by offering a wide range of security cameras and dashcams in addition to its action camera range.

If you’re looking for an ultra-cheap action camera without foregoing 4K, the Campark ACT74 is my recommendation. The spec is impressive for the price tag, and there are plenty of accessories packed into the box including two batteries and waterproof casing, which makes this compact camera even more of a bargain at less than $40.

How does the Campark ACT74 compare to the GoPro HERO8 / HERO7?

💭 What do users think of the Campark ACT74 versus the GoPro HERO8 / HERO7?

This budget camera has an army of fans and they collectively rave about the level of quality on offer for the price. Setup is easy and the build quality is reliable enough for action shots and underwater shoots. Some users complain of a lack of professional imaging, but that’s unsurprising considering the entry-level price point.

🔎 About Campark the company

Campark was founded back in 2008 by avid photographers who wanted to create an affordable action camera for sports. Based in Hong Kong, Campark sells a wide range of budget-friendly cameras and accessories.

📷 Click here to purchase or read reviews of the Campark ACT74

The DJI Osmo Action also deserves an honorable mention in this list. It’s not as much of a bargain as the other options I’ve picked out, but it’s a solid alternative to GoPro’s HERO8 / HERO7 range. We featured this camera in our Best (And Cheaper) DJI Osmo Action Alternatives article.

🏆 Which is the best cheaper GoPro HERO8 / HERO7 alternative?

Ultimately, the camera that you choose will come down to the features that you value and the way in which you intend to use it. Overall, I would recommend AKASO’s V50 Elite for its premium features and wide range of accessories. However, if you’re looking to buy your first 4K action camera and don’t want to invest a lot of money, you can’t go wrong with Campark’s ACT74. Or, for a mid-range option with great features and slimline good looks, YI’s 4K+ always delivers.

I hope you found this post about less expensive GoPro HERO8 and HERO7 alternatives useful, and that you now feel armed with all the information you need to make a good buying decision. If you have anything to add to my information, or you think I’ve missed an option from my list that my reader need to know about, please leave a comment below.

If you liked this post, why not share it with the GoPro lovers in your life? You may just be able to help them save a few dollars on their next action camera purchase.