You’d be forgiven for thinking that DJI had limited itself to the skies with their awesome range of drones, but they’re actually making quite an impact on land with their Osmo Action Camera. The Osmo Action is truly spectacular, but it doesn’t come cheap. Thankfully, there are some great alternatives out there if you want a quality Osmo-esque action camera at a more budget-friendly price. In this article, I’ve pitted four of the best cheap DJI Osmo Action alternatives against it to see how they measure up.

🔎 What to look for in a cheap action camera

These are the questions I asked myself when searching for the best DJI Osmo Action alternatives, so that I could narrow your search to 4 great options below.

If you want to record 4K footage without paying a premium for the privilege, I recommend the AKASO V50 Pro. For little over $100, you get a solid action camera with enough functionality to suit most videographers. 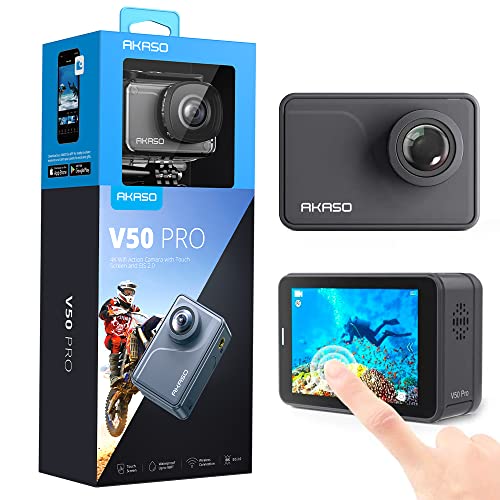 It doesn’t take a genius to figure out where AKASO got their design inspiration from. With the exception of the shape of the lens, the V50 Pro looks exactly like a GoPro (even the packaging is the same). The key design difference between the Osmo Action and the V50 Pro is that the latter isn’t waterproof so you’ll need to use casing if you plan to take it off dry land.

The V50 Pro comes with a basic remote control which can be used to take photos and begin video recording, but you can’t do much else with it. There’s no front screen to live-view your footage as there is on the Osmo, but it has Wi-Fi so you can link it to your smartphone to keep an eye on your framing while you film. Stabilization is pretty decent for a cheaper camera, and the 6-axis gyroscope will minimize shakiness which is ideal for recording action sports like mountain biking.

The 4K video is impressive for such a low price, and although you can only shoot at up to 30fps at this resolution you can increase that to 120fps at 720P resolution. The Osmo Action is capable of an incredible 240fps at Full HD resolution so is clearly superior, but if you only plan on using your action camera as a hobbyist it’s unlikely you’d need that level of quality anyway.

There are over 1500 reviews of the AKASO V50 Pro and the overwhelming majority are positive. Like any electronic device, you've got your occasional bad apples, but customers say that AKASO have been quick to replace items in those scenarios. We're fans of the AKASO brand over here at Travel is Life and have actually included them in other travel buyer guides in the past. Many of the positive reviews boast about the AKASO V50 Pro's high quality video and image stabilization, as well as it's support of external mics. Some of the negative reviews were because the users had problems with the software glitching, however, we are unable to know if those users upgraded their firmware before returning the device, which often fixes those type of software issues.

The APEMAN TRAWO costs less than $100 and has great reviews, making it a solid contender for the best cheap DJI Osmo Action alternative.

The TRAWO is very easy to use, and even though it’s not touchscreen, the side buttons make it easy to navigate through menus. The 2-inch IPS retina display is crisp, clear, and offers a more stable response time than traditional LCD screens. But, there’s no display on the front, so you can’t monitor settings or check your framing while shooting face-to-camera. The APEMAN app is intuitive to use and full of features though, so you can still get plenty of control when you’re remote shooting.

This action cam needs casing to be waterproof, but it’s capable of shooting to depths of 40 meters. APEMAN’s diversified scene modes include an underwater mode which has a green filter to better suit underwater filming. So, if you like to snorkel or scuba dive, this option could suit you better than the Osmo. This action cam comes with two 1350mAh batteries, which are the largest capacity on the market. Each one is capable of recording at 4K for 90 minutes or 120 minutes at 1080P or less, which makes this camera an excellent option if you like to head out for full days of shooting.

💬 How are the reviews of the APEMAN TRAWO?

The quality of 4K video and timelapse footage may not stand up to the Osmo, but it comes pretty close, according to reviews. Slo-mo shooting does fall a little short of DJI’s offering, but you can still achieve 120fps at 720P which isn’t bad for less than $100. The main downfall with the APEMAN is the image quality of its stills. Users find that they lose finer detail in their images and that scenes can look sort of waxy.

♥️ Click here to purchase or read reviews of the APEMAN TRAWO ♥️

To be frank, the design isn’t the sexiest on the market and it certainly looks cheaper than the other options on our list. But, it’s compact, rugged and perfectly capable of doing what it needs to do. The 2-inch IPS screen stands up to the other budget options on this list, and the menu is quick and easy to navigate.

Perhaps the most impressive thing about this budget camera is the huge array of accessories that comes with it. There are 19 pieces supplied with the camera, including two rechargeable batteries, several mounts for various uses, waterproof casing, and a carry bag.

The L1 is waterproof up to 30 meters which beats Osmo’s 11-meter depth capability. But, the Osmo doesn’t require casing to work underwater, so which option you prefer will depend on your personal usage. Audio capture is definitely lacking in comparison to the Osmo, so if you plan to vlog this probably isn’t the best option for you.

💬 How are the reviews of the Wimius L1 Action Camera?

The Wimius shoots 4K at 24fps, but as many of its reviewers note, it’s not capable of ‘true 4K’. This means that the camera uses software to increase the resolution rather than actually shooting at 4K, so film buffs are likely to be disappointed by the video quality. The 20MP stills are decent and will absolutely suffice for day to day usage. But, as I’m sure your common sense has already told you, you’re not going to get professional-standard quality at such a low price.

Ok, so the GoPro Hero 7 Black is only around a dollar cheaper (if not on promotion), but GoPro leads the action cam market so it’s the clear competitor for the Osmo Action.

DJI takes the crown for usability, and the front screen is particularly useful for vloggers. The color display has a slight lag but it lets you see your scene as you shoot which is a great bonus if composition is important for your project. The two cameras are evenly matched in weight but in my opinion the Hero 7 Black looks better and has GoPro’s signature polished design.

There’s very little in it when it comes to the specs of these two action cams. Both feature 4K/60fps maximum resolution, voice control, and 8x slo-mo speeds. GoPro is lacking the impressive variable shutter speed that DJI offers in manual mode, which some advanced videographers might miss.

💬 How are the reviews of the GoPro Hero 7 Black?

In terms of image quality, several reviewers who compared both models have said that GoPro offers beautifully bright and saturated imagery that packs more of a punch than the DJI. However this could also be a result of how the users adjusted their settings. Others said that the Hero 7 Black also handles motion better in 4K mode and its timewarp mode is also superior in terms of smoothness.

To summarize, the Hero 7 Black is pretty evenly matched with the Osmo Action, so which camera you go for will come down to how you plan to use it. And whether you want to save a dollar, of course.

I’ve been a big fan of DJI for quite some time now, so when I saw they were branching out into the action camera market I was excited. And, the Osmo Action did not disappoint. It’s my favorite action camera on the market and for me, it outperforms every other option at a similar price point.

But, if you want a 4K action cam without the hefty price tag, there are some fantastic options out there. Overall, I would recommend the AKASO V50 Pro as the best cheap DJI Osmo Action alternative. It packs in some impressively premium features for a very reasonable price and is a solid option for vloggers and action sports enthusiasts.

Which action camera do you use? Are there any other great cheap options that I’ve missed? Let me know in the comments.

Sophie Bellamy is a traveler, freelance writer, and Editor In Chief at Table For One. You can discover more of her work at Table For One. Be sure to join our Friends List for new videos every Tuesday, and if you're a travel blogger, join our Travel is Life Tribe. Happy travels!
Tweet
Pin
Share
Share
Share
0 Shares
Loading...