Join me at El Salar de Galerazamba, otherwise known as Colombia's Pink Sea. It's a magical looking place, and although it looks like it came from a fairy tale, it's real purpose isn't so sweet. You can also watch and share this video on Facebook and YouTube.

About The Pink Sea

It's called El Salar de Galerazamba and it's located about an hour Northeast of Cartagena on the coast of Colombia within the small pueblo of Galerazamba.

The sea is actually a salt mine and the bright pink hue is caused by colorful salt-loving microbes which create pigmented protein to absorb the sun's energy.

The bright pink color is only visible for two months out of the year in February and March when water levels are low causing a high concentration of microbes. During the rest of the year, the water is a rich shade of blue like on the other side of the quarry. 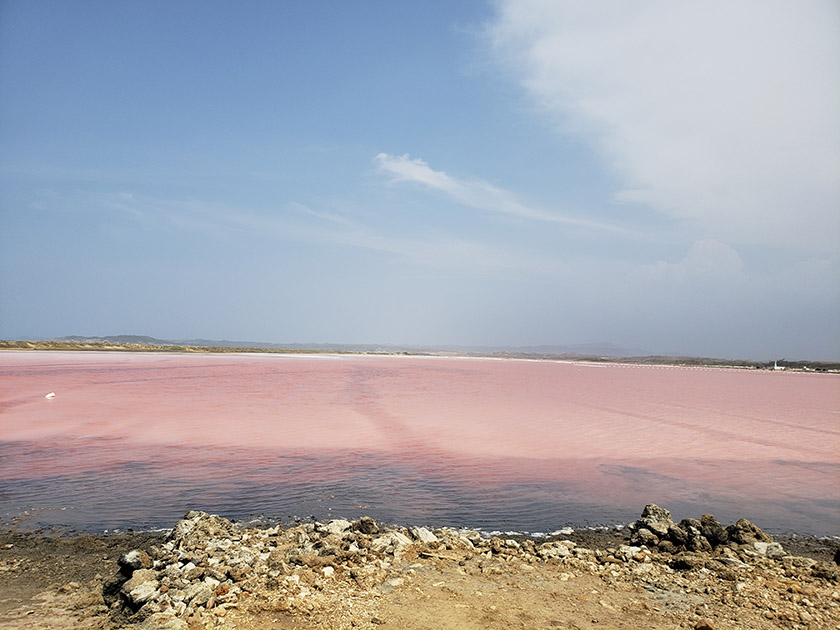 Can I swim in the Pink Sea?

Despite the high concentration of salt, the water is harmless and you are welcome to enter. Although be careful because the salt crystals are sharp against your bare feet. You'll definitely want to bring sandals, unlike us who did not come prepared! 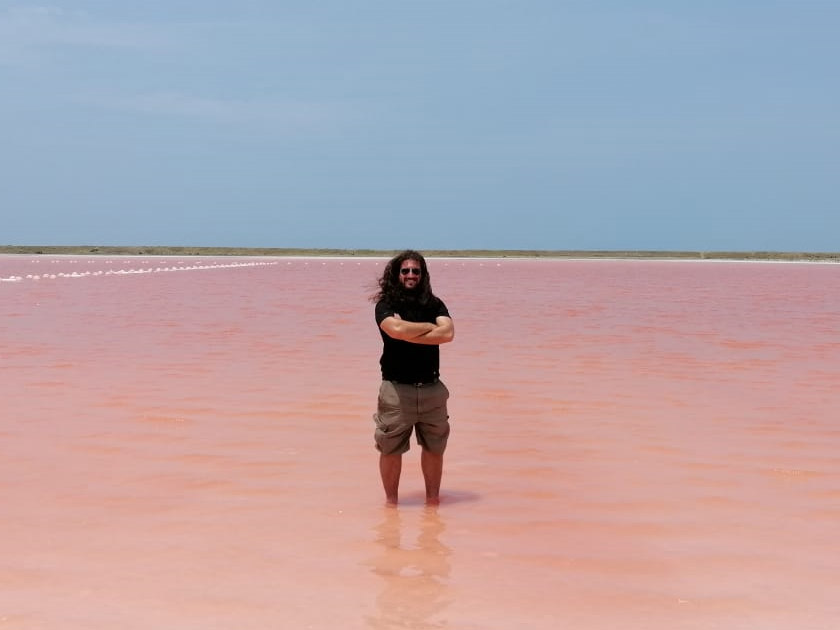 About the town of Galerazamba

The town of Galerazamba has been mining salt for over a hundred years. But just recently tourists have become aware of the natural phenomenon, and come by the busload for a photoshoot against this magnificent natural backdrop. Galerazamba is also known amongst surfers for its strong ocean waves. The influx of tourism has brought new economic opportunities to the historically impoverished town whose residents welcome your arrival.

At the moment, there isn't much to offer in the way of tourism in Galerazamba outside of The Pink Sea and going surfing, but that could change in the future. We only saw two hostels and a handful of small restaurants with limited hours. If you spend the night, you should plan ahead and bring some food and drinks with you.

How To Get To Galerazamba (The Pink Sea) from Cartagena

El Salar de Galerazamba is located about an hour Northeast of Cartagena on the coast of Colombia within the small pueblo of Galerazamba. The town is accessible from Cartagena via multiple buslines. We took a 15 passenger bus from the Berlinas-Marbella Station in Cartagena that passed through Galerazamba on its way to Barranquilla. They dropped us off at a small bus station in Loma de Arena, and we rode motorcycle taxis to The Pink Sea. The bus costs 22,000 pesos (about $7 USD) and the motorcycle taxi cost 5,000 pesos (about $1.50 USD) per person. It took about an hour to get from Cartagena to The Pink Sea using this direct bus. Entrance fees into The Pink Sea were 5000 pesos (about $1.50 USD) per person. The map below outlines our route including the two bus stations.

How To Return To Cartagena from Galerazamba

To return to Cartagena, we walked from the Pink Sea to the center of Galerazamba about 15 minutes away, and then caught a local bus back to Terminal de Transportes de Cartagena, which is about 12 km away from The Walled City. From there we took an Uber back to our Airbnb in Bocagrande. The local bus cost 10,000 pesos (about $3.25 USD) and the Uber was 18,000 pesos (about $6 USD). The route back took about 2 hours because the local bus makes multiple stops in several towns on the way back to Cartagena. The map below shows this route.

What did you think of The Pink Sea?

Have you been? If so, drop a comment below this post or on the Facebook video and let me know if you think it's worth a visit while in Colombia. Below are three of my most recent videos that I've filmed while in Colombia. You can also check out all of my travel videos.

Eat Dinner In A Prison – Join me at a restaurant inside the San Diego Prison in The Walled City of Cartagena where the inmates are the chefs, food servers, bussers, and maitre des.

The Fruit Ladies of Cartagena – I sat down with Beatriz and Juliana to learn more about the women behind fruit and the tireless work they do putting smiles on tourists' faces each day.

Tejo: Colombian Cornhole with Gun Powder – Join me in Colombia to play their traditional sport of Tejo – an “explosively” popular game similar to cornhole but with gunpowder! Would you play?