9 Pros & 4 Cons to Living and Working Remotely in Medellin, Colombia 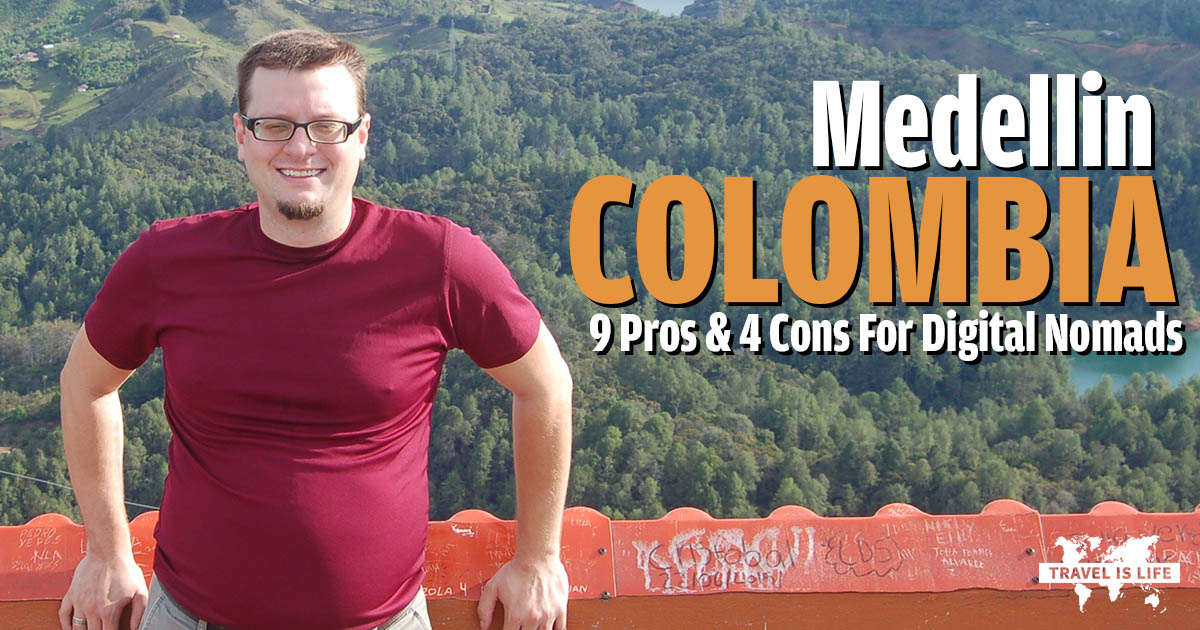 Editors Note: Hey everyone, I just got back from spending 3 months in Medellin myself. After you read this guest post by Chris Backe, check out 20 Things I Loved / Hated About Medellín Colombia as a Digital Nomad for a second perspective.

Today's article by Chris Backe is about living and working remotely in Medellin, Colombia, the capital of Colombia’s Antioquia province, nicknamed the “City of Eternal Spring” for its year round temperate weather. Chris writes about weird, offbeat destinations and life as a long-term traveler, which you can read on his website Worthy Go. This post is part of our series on Popular Nomad Destinations around the world, which is not intended to sell you on a destination or steer you in any direction, but rather present one nomad’s viewpoint from two different perspectives. Here goes 9 Pros & 4 Cons To Living and Working Remotely in Medellin, Colombia.

Medellin is far from the biggest city on the continent – or even in Colombia – but it definitely wins the ‘Most Improved' award. Decades have passed since Pablo Escobar's reign of cocaine ended violently in December 1993, and folks here have a complicated memory of him (if you've seen Narcos, you know why).

Since then, however, the ‘City of Eternal Spring' has transformed itself into a modern and metropolitan city safer than many major US cities (you can even drink the tap water). A still-shiny two-line metro and cable car system connects the city better and faster than the endless and colorful colectivo buses, yet both systems manage to coexist.

#1) Getting around is easier than expected, but there's some fine print.

You already know about Uber. It's here in Colombia, but was declared illegal in November 2014. While the service is popular, a number of taxi drivers have caused issues for Uber drivers (if you decide to take one, sit in the front to make it less obvious your driver works with Uber). As an alternative, try EasyTaxi. EasyTaxi works in virtually every South American city, and you pay your driver in cash when you reach your destination. Any problems? Report them in-app instantly. Another option: Tappsi, which is currently limited to cities in Colombia, Ecuador, and Peru.

Medellín's two-line metro/subway is clean, modern, and fairly intuitive. For whatever reason, however, the majority of metro stations don't have ticket machines, and there are often long lines to buy tickets at the booth. For any other trip of more than a couple days, get a contactless Civica card for each traveler. These can be obtained at the San Antonio station or at any other terminal station for free – bring your passport and 20-30 minutes of time to take care of business. More about these cards at https://civica.metrodemedellin.gov.co. #2) The Internet is good around Medellin. The coffee shops around Poblado will have some of the fastest Internet in the city, though naturally the connection will depend on how many people are on at any given time. Elsewhere around Colombia, the connection is typically solid but slower. This central, expat-friendly area is the place to be catered to while enjoying plenty of international food. It's a vibrant area with lots to see and do, and an easy area to enjoy until the wee hours of the morning. This is also one of the main areas to meet other digital nomads and expats. Bandeja refers to the platter, while paisa is the term for a local resident, so it's essentially a catch-all term for a typical meal eaten by locals. What's on the plate can include red beans, pork belly, white rice, ground beef, chicharron (fried pork belly), fried egg, patacones (plantain), chorizo, arepa (bread), and avocado. Portion sizes across the city are generously large (even by North American standards) – and yes, it's meant for one person unless otherwise indicated. Come hungry.

#5) Medellín is generally safe, although petty theft and crimes of opportunity can still happen to anyone. You will notice thick bars protecting stores and their merchandise, though it's mainly a holdover from decades past. (As anywhere else in the world, be aware of your surroundings, avoid looking visibly drunk, and know where you're going.)

The only neighborhood to avoid while on your own is the San Javier neighborhood in west Medellín, and even that's perfectly safe while on one of the guided tours to the area. The best choice? Tours conducted by the members of Casa Kolacho, a group of community leaders promoting peace through hip hop, graffiti, DJ'ing, etc. Book online at http://www.toucancafe.co/book/.

#6) The weather is spectacular. Being right on the equator helps, of course, but the daily mean (e.g. the average of the high and low of the day) is 22-23 C (71-73 F) all year round. It's also pretty stable across the seasons, which are all pretty mild since it's right on the equator.

#7) The aguardiente, the national firewater. It tastes like licorice, is derived from sugarcane, and is potent stuff (29% ABV). It's drunk in shot glasses, and the sin azucar (without sugar) version is slightly easier on the stomach. The local cervesa (beer) is serviceable and plenty drinkable, but doesn't stand out in the same way. If you've spent any time learning to dance, this is a great time to break out the dancing shoes. Among other places, learn to salsa or bachata at Dancefree (Calle 10A carrera 40-27, just before Parque El Poblado). Group classes start Mon-Fri at 8pm (Sat at 9:30pm), and of course the dance floor opens up afterwards to dancers of all levels afterwards. More at http://www.dancefree.com.co/. Whether you had to watch Narcos or read up on your history, you might be curious to know how the once-richest man in the country has been laid to rest. The answer? A simple gravestone that's not the easiest place in the world to find (use GPS: 6.159465, -75.620626 to pinpoint its location). There's a marked difference in price between places catering to gringos (you) and places catering to paisas (locals). This isn't necessarily a rip-off (as imported products will cost a fair bit more), but is worth watching out for. Very few locals speak English — this isn't a deal-breaker for some, but it can make communicating specifics more difficult. Brush up on your Spanish before arriving. (Note: NOT a con for some, but it was for me). That's really my focus on One Weird Globe, but in recent decades Medellin has spent their money building boring stuff… libraries, the subway, new water pipelines… If you're coming as a tourist there's still a fair bit to see, just not as much weird stuff and a relatively undeveloped tourist trade.

#4) Getting a three-month tourist visa extension is less than intuitive. Make an appointment, arrive at the office, fill out a Spanish-only form, and pay. (Protip: It’s far easier to pay via debit or credit card at the office itself – paying via cash involves heading to a bank and making a transfer to their numbered account, then bringing the receipt for proof of payment).

So what’s the consensus on Medellin, Colombia?

With all that said, I spent five wonderful months in Medellin, and I'd happily go back. It's a great place to get acquainted with South America, modern enough to feel comfortable, and cheap enough to be sustainable.

SEE ALSO: 20 Things I Loved / Hated About Medellín Colombia as a Digital Nomad

Read more from our series on Popular Nomad Destinations:

If you like it then you should’ve put a pin on it!